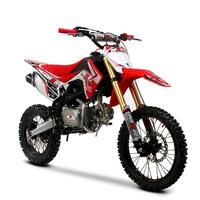 Zoom    More Images
£930
M2R RACING RF140 Dirt Bike.
Recently revised and improved the series 2 RF140 pit bike has been built on the CRF110 style platform..
.
YX Motorsports 140cc 4stroke engine.
It features a YX Motorsports 140cc 4stroke engine. For pure performance reasons the gearbox has been fitted with a racing pattern sequence. Neutral at the bottom then 1234 gears up. It's also 'kick in gear' so no need to select neutral to start the bike..
Reinforced Black SDG Hubs.
Reinforced Black SDG Hubs have been laced with satin black spokes anodised red spoke nipples and strongly reinforced powder coated black steel rims. Super chunky block pattern knobbly motocross tyres offer an awesome offroad grip. Not only is this wheel set up super strong but looks freaking cool. Trick as hell..
Hydraulic M2R RACING Front Forks.
The trick anodized gold inverted hydraulic M2R RACING front forks work well feel great and have plenty of travel keeping the front wheel planted where it's needed..
M2R RACING Adjustable Rear Shock.
The M2R RACING rear shock is spring adjustable works well and offers great feedback to the rider..
Extended Swing Arm.
The chassis also features an extended swing arm which helps with stability at speed over whoops and ruts..
Vented Brake Disks.
If you're going fast then you want to be able to stop sharpish. Fitted up front is the same twin pot hydraulic front brake as fitted to our factory works spec supermoto race bikes including a huge 220mm heat dissipating vented wavy front disc. The rear brake also hydraulic is a single pot again coupled up to a vented 190mm wavy disc..
Gripper Seat.
A few other nice touches at no extra charge arehellip; a gripper seat copied from motocross it helps the rider keep seated in one position rather than slipping back and forth along the seat..
Snapback Levers.
Snapback levers help prevent breakage in the event of an off by folding back on themselves..
Soft Rubber Red Grips.
Soft rubbe..... (more)

Just so you know - we use cookies for commission-based marketing and advertising.

Third party cookies
Third party cookies will be set when you follow a product link.
Like other shopping sites we also work with third parties which enable us to keep this site free to use.
When you click on a link you may be taken to a third party website which may record information about your choice of product, as well as other information, which may include your IP address and device configuration.
These are used by our partners to deliver commision-based marketing and relevant advertising to you.
We do not have control over these cookies and the information they contain.
If you decide not to accept these cookies then we will make sure that you cannot accidentally follow a link that would result in third party cookies being stored.

You can change your cookie preferences at any time by following the COOKIE PREFERENCES link at the bottom of the page.

We use a third party to supply this link.
They will set third-party cookies when you follow this link.
You have not agreed to accept cookies so we have made sure you haven't accidentally followed the link.
To follow the link anyway you will need to change your cookie preferences to ACCEPT COOKIES below.